“Instead of a transcendent excursion into an altered consciousness, sensory deprivation had hilariously underscored the primacy of my body; it was almost a purely physical experience from start to finish. It was like being at a meditation retreat with a runny nose. My brain was simply incapable of escaping the signals my body was sending it… Don’t get me wrong. I’m a neuroscience junkie. But we are not just a brain in a jar; we are also bodies, and what we do with those bodies can influence the brain."1

“In reviewing so much of this literature, there is a pattern that we need to note and this is one that basically affirms the Christian worldview. It comes down to this: the alternative worldview of physicalism, now so enshrined in modern science, really wants to describe every single human state of consciousness or emotion as mere chemistry, mere physicality. But how in the world do you describe the love between a husband and a wife, between a parent and a child, between a brother and a sister, or even merely between friends as merely being the reflection of some kind of chemical or physical interaction? Taken just in terms of our own empirical experience that argument doesn’t make sense, and it doesn’t make sense because it shouldn’t make sense."2

“By means of his creative adaptation of the Aristotelian principles, Aquinas overcame the deficiencies of earlier Christian anthropologies that displayed an excessive spiritualism or naive materialism regarding human nature. Aquinas stresses a genuinely unitary conception of human nature. Soul and body require each other: the soul depends on the body as its instrumentality in the world, and the body depends on the soul as its principle of life and activity. As the form of the body, the soul must be simultaneously present to the whole body and each of its parts. As the intellectual principle, the rational human soul raises all of the activities of human life (including those we share in common with plants and animals) to a higher plane”3

What does “Psychosomatic Unity” mean?

Psychosomatic unity is a term used to describe human nature from the Christian worldview. It captures the essence of what it means to be a human being. To help understand the phrase “Psychosomatic Unity”, we can break it down and consider its component parts. The word “Psychosomatic” comes from two Greek words: “psycho” (from “psykhe” meaning “mind") and “somatic” (from “somatikos” meaning “body").4 When discussing the term “psychosomatic unity”, the word “mind” does not necessarily refer to the brain or its activity; it refers more broadly to a part of a human being which is non-material (it can’t be seen or touched like our bodies). Thus, “Psychomatic Unity” refers to a unity of the mind and the body or, more broadly, a unity of material and non-material components.

To visually capture the psychosomatic unity, I propose the following diagram: 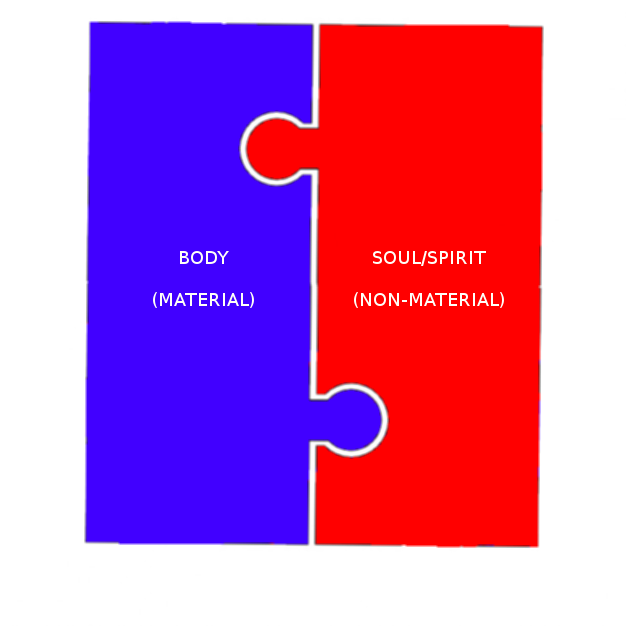 I chose to represent the psychosomatic unity as two, interlocking puzzle pieces to capture the distinctness of the material and non-material while still describing their unity into one essence (a human). The body is not the soul and the soul is not the body. Nor is man simply “a body plus a soul - which would make of him two individuals; but a body that is what it is (namely, a human body) by reason of its union with the soul."5

You can find bible references to support the existence of a material and non-material component in a human being here.

What is the nature of this unity?

If psychosomatic unity refers to the unity of the material with the non-material, what is the nature of this unity? Can this unity ever be broken (in terms of the analogy depicted in the diagram above, can the puzzle pieces ever be taken apart)? What happens if this unity were broken?

Based on James 2:26, the material and non-material components will be separated at death only to be later reunited at the resurrection of the body (Philippians 3:20-21, Romans 8:11, and Romans 8:22-23). As on systematic theology book puts it:

“The material (body) and immaterial (soul/spirit) function together in one person, embracing both unity and diversity. This complex unity is conditional, since death in a fallen world separates body and spirit (James 2:26). Yet this separation is temporary, since all people are headed for resurrection, a reunion of body and spirit in eternal forms."6

The next question then becomes, what happens when the material and non-material components are separated? Currently, I don’t know. I hope to research what the Bible says about this in the future and will add links to any follow up blog posts dealing with this topic.